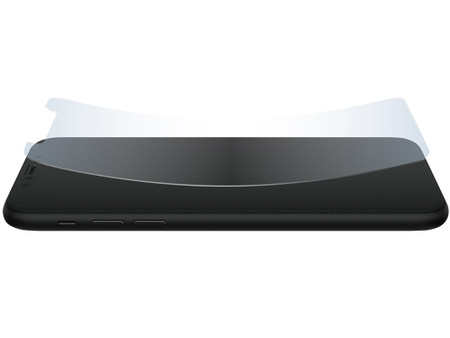 The new iPhone X/Xs screen display has unparalleled resolution and detail. Enjoy this amazing clarity anywhere by dramatically reducing screen glare from the sun and overhead lights with Power Support's Anti-glare Film™ for iPhone X/Xs. Besides reducing screen glare and hotspots the hard surface coating protects the screen from scratches, dirt and dust while maintaining excellent surface responsiveness. Our Japanese manufactured film is cut to exact dimensions to accommodate the placement of screen sensors and the front facing camera while protecting your phone’s glass from scratches and abrasions. The unique Anti-Fingerprint technology virtually eliminates fingerprints and smudges from your screen, allowing you to view the beautiful iPhone X screen without glare, scratches or dirt. The Anti-glare film™ is great for anyone who works with their hands because it is also extremely resistant to chemicals and oils commonly found in make-up, cooking ingredients, massage oils, or mechanical equipment. If the film gets dirty simply wipe clean. This does not mean it is impossible to get a fingerprint on the screen. It means that the dirt and oils found naturally on your fingers and hands do not adhere to or penetrate the hard coating of the film. This preserves the surface integrity of the film making it easy to clean.

Unlike some screen films that require an elaborate and messy application process or a special applicator operated by store personnel, Power Support’s Anti-glare Film™ is easy to apply. Our Rip In Place (RIP)™ screen protector application technology (see instructions below) makes it easy to apply the film. Our film is not “glued” to the screen, but clings. This makes it easy to remove and re-attach the.

Compatible with the NEW iPhone 11 Pro, the iPhone Xs and the iPhone X  Purchase the compatible…

Compatible with the NEW iPhone 11 Pro, the iPhone Xs and the iPhone X  Purchase the compatible…

Compatible with the NEW iPhone 11 Pro, the iPhone Xs and the iPhone X   The glass on your…