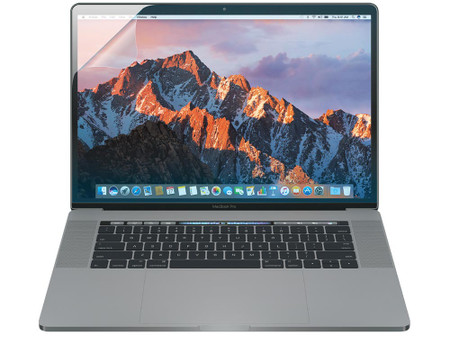 "I have to say, the most fantastic screen protector for the MacBook I reviewed so far!" -  Independent YouTube product reviewer, RandomRazr.
See his video review under the Product Video tab.

Bright sunny days and glaring overhead lighting should not prevent you from taking your new 2016 MacBook Pro 15-inch anywhere you want. This amazing computer has the brightest, most colorful Mac notebook retina display ever. It features brighter LED back lighting with an increased contrast ratio, delivering deeper blacks and brighter whites. Power Support’s Anti-Glare Film for the MacBook Pro 15-inch for 2016 dramatically reduces screen glare and hotspots, giving you a clear view of the truer-to-life images that realistically display vivid details, essential for graphic design, color grading, and editing. This is the first Mac notebook to support wide color, for even more vibrant greens and reds and you want a film that prevents glare while letting the vivid images shine through.

Power Support engineers have developed the best anti-glare film available for the MacBook Pro that also protects your screen from dirt, dust and scratches. Dust and dirt can be cleaned off, (we suggest WHHOSH! Screen Shine) but a ding, a chip or a scratch will permanently mar and deface your MacBook Pro’s screen. You will never be able to fix a scratch on the screen’s surface. Scratches and chips also weaken the surface of your glass. They may not cause the screen to crack, but a scratch will make a crack more likely. Dust is temporary, but a scratch is forever. The hard surface treatment resists scratches, fingerprints and dirt. If the film gets dirty simply wipe clean. This does not mean it is impossible to get a fingerprint on the screen. It means that the dirt and oils found naturally on your fingers and hands do not adhere to or penetrate the hard coating of the film making it easy to clean.

The Anti-Glare Film for MacBook Pro 15-inch for 2016 clearly protects your screen’s surface while reducing glare.

Compatible with MacBook Pro 15-inch with touch bar for 2016 and 2017 "I have to say, the most fantastic screen protector for the MacBook I reviewed so far!" -  Independent YouTub...