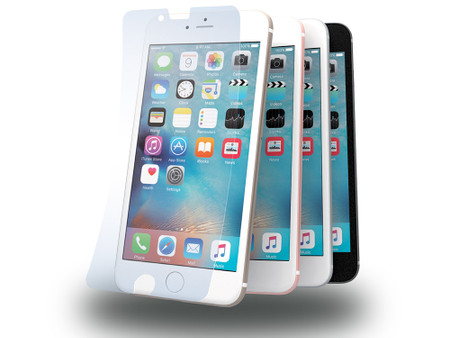 The special formulation also makes the Hybrid Anti-Glare™ Film extremely translucent while resisting glare and hot spots from lights and the sun. This means the images are sharper and the colors are more vivid. There is actually less material between your eyes and the iPhone screen resulting in better visibility, even when you are wearing Polarized sunglasses. There is also less film between your fingers and the iPhone screen resulting in excellent responsiveness.

The surface of the Hybrid Anti-Glare™ Film protects the iPhone 6s/6 Plus screen from scratches, dirt and dust while reducing fingerprints and smudges. This does not mean it is impossible to get a fingerprint on the screen. It means that the dirt and oils found naturally on your fingers and hands do not adhere to or penetrate the hard coating of the film making it easy to clean. The anti-glare surface treatment reduces hot spots and reflections resulting in spectacular image quality, sharp images and bright vibrant colors.

Compatible with the iPhone 6 Plus and the iPhone 6s Plus Power Support's Anti-Glare™ Film provides un-paralleled protection for your iPhone 6 Plus. This amazing film is cut to exact dimensions...

Compatible with the iPhone 6 and the iPhone 6s Power Support's Anti-Glare™ Film provides un-paralleled protection for your iPhone 6. This amazing film is cut to exact dimensions to perfectly...